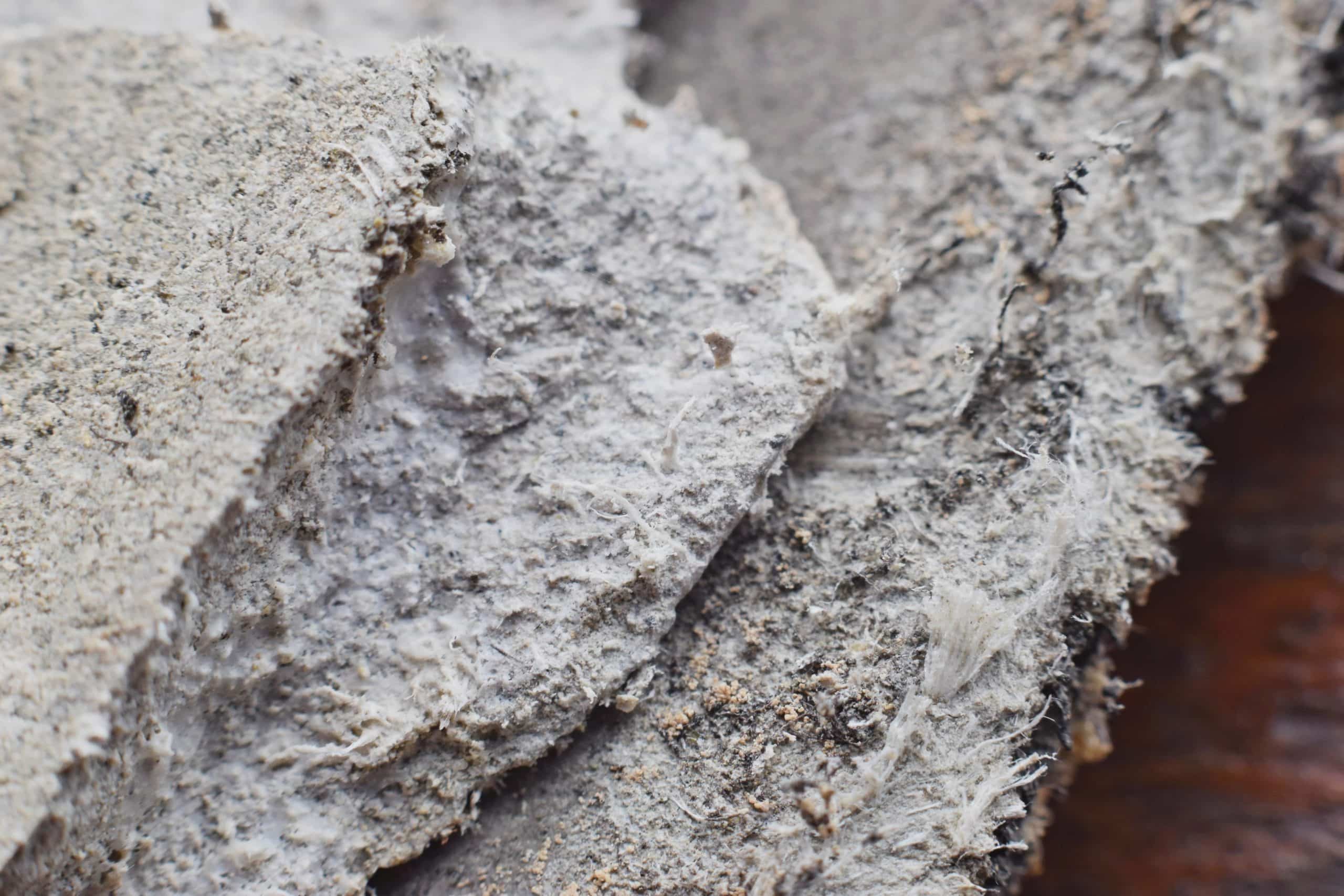 For many years, we have heard the term asbestos and people removing it from buildings and homes.  It was used in ceiling and floor tiles, cement, roofing felt, adhesives, sealants, and plastics for decades. Additionally, many of those products are discontinued or the companies need permission from the EPA to sell them.

Asbestos was also used in homes and buildings in the walls, floors, and ceiling.  This is a mineral that is naturally occurring and made of soft and flexible fibers.  In addition, it was on the paper facing and backing, and mastic adhesives for gluing tiles to the ceiling.  If you have these ceiling tiles, you may want to get rid of them.

How do you identify asbestos ceiling tiles?  They were used in homes or buildings built between the 1920’s and 1980’s.  Also known as drop ceilings, suspended ceilings, and acoustic ceilings and came in sizes of 2×2 and 2×4.  Unfortunately, they are difficult to identify without sampling of the material by a professional.

Let’s take a look at why this is important, why the tiles were used, the link to cancer, laws to ban the use, how to identify them, what you can do, options if you have asbestos, health concerns and other places you might find asbestos.

Why This is Important

Ceiling tiles are made of various materials such as metal, glass, fiberglass, mineral wool, gypsum, perlite, and clay to name a few. However, homes and buildings built between the 1920s and 1980s, but more likely the 1950s–1980s, may have asbestos ceiling tiles.

They were used mostly in the kitchens and basements in homes to cover ductwork.  Unfortunately, asbestos exposure is linked to many different forms of cancer such as lung cancer and Mesothelioma. It is best to get the ceiling tiles out of the building or home if possible, especially if the tiles have been disturbed.

The fibers in asbestos are resistant to heat, electricity, and corrosion and this helped with fireproofing and durability for buildings.  In addition, they were low in cost so they were cheaper to use.  Asbestos was even used for popcorn ceilings.

Laws to Ban the Use of Asbestos

The Environmental Protection Agency (EPA), created in the 1970s, fought to pass legislation to stop the use of asbestos products.  Despite the ruling, it was overturned.

The law allowed the EPA to improve air quality and to set national standards for air pollutions including asbestos.  In addition, it allowed the U.S. to ban the use of asbestos in ceiling tiles.

This act allowed the EPA to regulate how asbestos product producers handled and labeled products.

How to Identify Asbestos Ceiling Tiles

4. Shape of a square or rectangular

Unfortunately, they are difficult to identify without a sampling of the material by a professional.

1. Manufacture Date– Look for a manufacture date on the ceiling tile.  It could also be a stamp on the back of a tile, leftover packaging, or records of the ceiling installation.

2. Age of Building– If the building was built after the mid 1980s, it will not have asbestos ceiling tiles.

3. Age of the Ceiling – Find out the age of the ceiling.  For example, the home may have been built in the 1970s, however, was the ceiling renovated after the mid-1980s?  If yes, make sure that the entire ceiling was replaced.  If it was, then you don’t have asbestos ceiling tiles.

4. Statements from the Manufacturer – If the manufacturer is a company that has stated they never used asbestos ceiling tiles then it is a good chance you do not have them in your home.  Where can you find the list? Check the manufacturer’s website for information or click here.

These companies knew that the mineral was harmful for people and continued to make the products. They eventually filed bankruptcy and established trusts in which they compensated many of those affected.

What You Can Do

1. Check the Attic or Basement for Extra Ceiling Tiles

Sometimes extra ceiling tiles may be in the attic or basement and have a brand stamped or other identifying information.  However, if you don’t see this, treat the ceiling tile you have as possibly having asbestos.

2. Call a Professional to Test the Material

If you are unsure what type of material is in the ceiling, a professional can test a sample. This is not something for you to do on your own.

3. Wait on Renovations in the Home

If you suspect there are asbestos ceiling tiles in a home or business, do not renovate until you call a professional.  Disturbing the tiles will cause the material to flake off and release asbestos into the air.  The release into the air can cause health problems for anyone who spends time in the home or building.

Options If You Have Asbestos Ceiling Tiles

Many wonder what their options are if they have asbestos in the ceiling tiles.

This is covering the asbestos ceiling tiles so that the fibers in the tile cannot become airborne.  Often, drywall is used to cover these tiles.

It is recommended to hire a professional to make sure everything is handled properly. However, it may not be a long term solution as disturbing the tiles or degradation can cause the asbestos to be airborne.

Removal of the Asbestos Ceiling Tiles and Cost

Removing the tiles is another option.  As stated above, a certified and licensed asbestos professional must be the one who removes the tiles.  This is not something a homeowner can do as it is very dangerous.

Asbestos fibers can settle in the lining of the internal organs and cause health problems.  Long term exposure can cause Mesothelioma, cancer caused by asbestos.  Unfortunately, once diagnosed a person only lives about 12-21 months.

Additionally, in the 1930s, it was determined that the tradespeople in mines, shipyards, and other professions were diagnosed with lung cancer and Mesothelioma. It was traced back to working in places with large amounts of asbestos.

Other Places You May Find Asbestos

Asbestos is also seen in floor tiles as it was mixed into the tiles to make them stronger and withstand the heat. These tiles were manufactured in the 1920s-1970s. Asbestos was also used for the backings to keep them locked to the ground.

After the 1980s when legislation was introduced about asbestos in the floor tile, production was stopped. However, some asbestos ceiling tiles may have been stockpiled in the company’s warehouses and sold shortly after. Today, laminate and new vinyl are made without asbestos.

Asbestos was in the tape to wrap heating pipes and sometimes water pipes.  In addition, if you happen to have a water leak, it is a good idea to see if asbestos was used to wrap the pipes in the home.

If you find a ceiling stain in your home and not sure if you have asbestos ceiling tiles, be very careful cleaning it.  This is because disturbing the tile is what causes the toxins to get in the air.  It might be a good idea to wait until the professional can tell you if the ceiling has asbestos or not.

This was mined in Montana and used for insulation until 1990.  It contained a naturally occurring asbestos called, tremolite-actinolite and predominantly used 1900-1940s. Furthermore, a professional can tell you if you have this in your home.

Many popcorn ceilings were made with asbestos before the 1980s. Call a professional to check it out before tearing it down.  Additionally, if you decide to take down the popcorn ceiling on your own, there is a procedure to do it safely.

Homes and vehicles had asbestos additives in paint in the 1900s to 1980s.  This is because it was widely available, cheap, strong, and lightweight.

Interior designers used it for the textured walls in the homes and as mentioned earlier, popcorn ceilings were very popular. In the Mid 1980s, EPA and OSHA put an end to using asbestos in paints when discovering how toxic it was.

When to Call a Professional

Finally, asbestos is not something to play with and usually, if it is left alone and undisturbed, it will be fine. Apart from this, unless you are the original owner of a home, how do you know it hasn’t been bothered?

It is a good idea if your home falls into any of the categories above to have a sample taken of the ceiling or look for any of the identifying characteristics. Leave a reply below for us and we look forward to answering your questions!